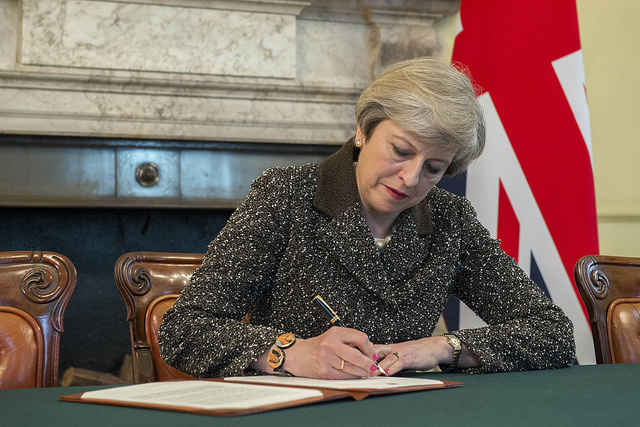 With the Supreme Court handing down its judgment in Miller v Secretary of State for Exiting the EU on 24 January this year, one might have been forgiven for thinking that the issues around the legality of the triggering of Article 50 had been settled. As we all now know, the Supreme Court decided that Parliament had to give legislative authority for UK ministers lawfully to notify the UK of its intention to withdraw from the EU. Legislation was passed and the Prime Minister duly wrote President Tusk her Article 50 letter.

But Brexit is the gift that keeps on giving. At least for lawyers.

The calamitous outcome of the Prime Minister’s decision to call an early general election – in the form of a hung Parliament and a minority Conservative government – has given some quarters pause to revisit Article 50 to look for ways to pause or even halt the Brexit process. More dramatically, as reported in the Telegraph it is also being suggested that the Article 50 letter is actually legally devoid of purpose because no formal ‘decision’ to withdraw has been taken.

The argument that Article 50 has been falsely triggered is made by barrister David Wolchover in a recent issue of Counsel magazine. The argument is simple. Article 50(1) TEU states:

Any member state may decide to withdraw from the Union in accordance with its own constitutional requirements.

For Wolchover, the notification that is made under Article 50(2) which starts the withdrawal process depends upon their being a prior decision to withdraw. Given that the referendum held a year ago was not itself such a decision, it would have to be for some other body to make a formal decision. And given that the Supreme Court in Miller made clear that as the consequence of withdrawal was the loss of a source of rights in UK law which required express statutory authorisation, only Parliament could make such a decision. Wolchover’s claim, then, is that while Parliament may have authorised the notification under Article 50(2) TEU,  the European Union (Notification of Withdrawal) Act 2017 does not expressly enshrine a decision under Article 50(1) to end the UK’s membership of the EU.

It is a clever little argument. It is, however, misguided.

As with Brexit more generally, it is important to have a sense of perspective. More precisely, we need to be clear about what UK law demands and what EU law demands. It is easier to start with the latter.

I have long argued that from an EU law perspective, Article 50(1) is descriptive rather than normative. It describes a state of affairs which EU law presupposes exists, and subsequently lays down procedures for the management of that reality. In normative terms, at the very most, it identifies in EU law a right which exists under international law to withdraw from a treaty. Rather than leaving it up to the Vienna Convention on the Law of Treaties to regulate, Article 50 TEU for the first time sets out the procedures which the EU will follow. But even in these terms, Article 50(1) is describing rather than prescribing something.

Where EU law comes to life is in terms of the procedures laid down in Articles 50 (2)-(5) TEU. In particular, Article 50(2) is quite clear that the Article 50 procedures apply as soon as the European Council is notified of the intention to withdraw. Here, EU law is dealing with the intention to withdraw and not the decision which is – rightly – a matter of domestic law and politics. In this way, all that EU law has to contend with is the Article 50(2) notification and the consequences that then follow in terms of negotiation of a withdrawal agreement and the termination of membership.

As to UK law, what is clear from the Miller judgment is that key exercises of executive power are subject to domestic legal controls. UK law does not need the wording of Article 50(1) TEU to require that such exercises of power are in accordance with domestic constitutional requirements. Indeed, as an aside, when Article 50 was being drafted it was proposed to drop this part of Article 50 as it was suggested that what was or was not in accordance with domestic constitutional requirements was rightly a matter of domestic law. But it would be wrong to read too much into the retention of this language. The Supreme Court in Miller came to the conclusion that it did,not because EU law instructed UK courts to determine the constitutionality of the exercise of executive power, but because that’s just what a UK Supreme Court should do.

In this way, whether or not a formal decision to withdraw has been made (and the lawfulness of that decision) is a question for domestic law. Indeed, it is right to say that the domestic process – the decision, the notification, and acceptance of a future withdrawal agreement – are rightly matters to which ‘constitutional requirements’ attach as a matter of UK constitutional law. If it turns out that there is a legal defect capable of being challenged before a UK court which would suggest that a lawful decision is not in existence then self-evidently that would have domestic political and legal repercussions. But it would have no automatic legal consequences for the processes at EU level which are underway as a consequence of the Article 50(2) notification.

Certainly, it would not be for the European Court of Justice to make a determination of whether a decision had been made in accordance with domestic constitutional requirements. Rightly it would consider that to be a matter of the interpretation of domestic law. If, as a consequence of a UK legal process, it was clear that no such decision existed, then it might be invited to consider the consequences for the exercise of powers by EU institutions. But one might surmise that long before that happened, the politics would have taken over.

So my point is that the relationship between Articles 50(1) and (2) is not that depicted by Wolchover. His mistake is not to see that the provisions operate on different levels and while one has implications for the other, there is no automaticity to their legal articulation.

To further clarify my argument, let’s imagine that prior to the election and when considering the text of the European Union (Notification of Withdrawal) Bill, Parliament had done precisely what Wolchover asked of it, namely, that it made an express statement that a decision had been made to withdraw the UK from the EU and on that basis, the Prime Minister was authorised to give notice under Article 50(2). Imagine further that following the general election, and with a change of heart, it was decided by Parliament that the UK would not withdraw from the EU. A new domestic decision would have been made. And it would make not the slightest difference to the operation of Article 50(2) because – as an EU and not a domestic procedure – some act at EU level would be required: revocation of the notice. Again, as I have argued elsewhere, the UK can revoke its Article 50(2) notification unless and until it is acted upon by the UK finally withdrawing from the EU.

The point to grasp is that while Articles 50(1) and 50(2) clearly relate to one another, they also act independently to one another on different legal levels.